Stihl puts together a really well-thought out and refined machine with their BT 131 Earth Auger. It sits at the top of the high-end market with a lower price than Echo and has the features and performance to warrant upgrading from the value brands.

The Stihl BT 131 Earth Auger is the company’s biggest and most powerful hole-drilling tool for applications from construction to ice fishing. Let’s in-auger-ate some holes in the Earth and see how it does!

If you’ve got holes up to 8″ to dig, Stihl’s BT 131 is a fantastic tool to get the job done that you can easily haul in the back of your truck or utility vehicle. It’s great for all types of agricultural and landscaping jobs from fence posts to barn builds.

I maintain a Georgia horse farm in my “free” time. It’s in this horse country that the Stihl auger and I have quite a job: set initial posts for a new barn using an 8-inch bit – the largest the BT 131 accepts. Then, we’ll install new posts for a fence. The auger must work through some pretty hard-packed clay with root and rock obstacles if it’s going to get the job done. 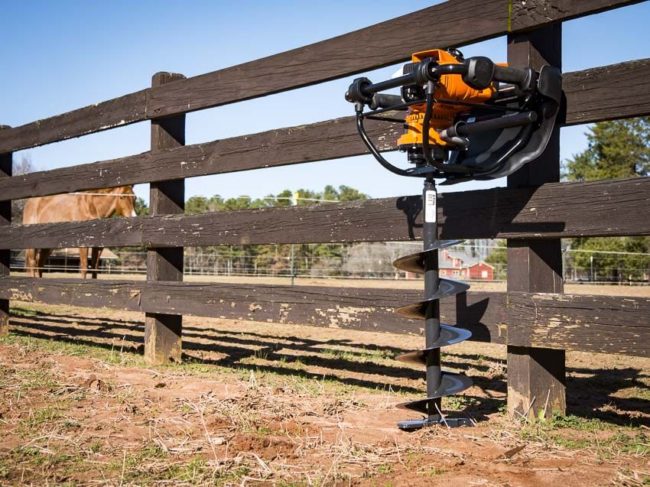 When I loaded the Stihl auger into my John Deere Gator, I was happy to find out that the tool plus Stihl’s 8″ bit is compact enough to fit completely in the cargo bed. It’s also lighter than I expected. 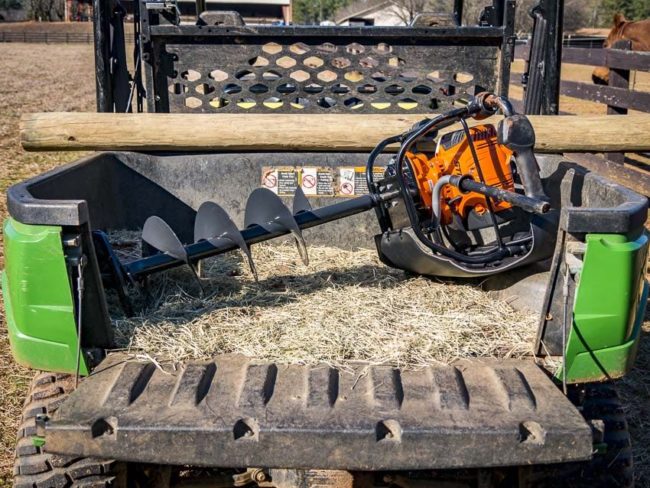 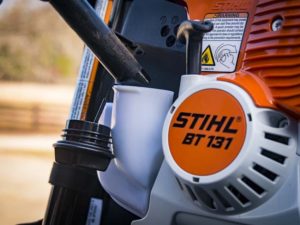 When you lay the auger on its side, the gas cap is accessible which makes fueling easy. Stihl emphasizes the BT 131’s large, 24-ounce fuel tank for long run time and efficiency. Having to stop less often to refuel helps me get the job done that much faster.

One thing I really like on startup is that I can set the brake so that the bit doesn’t turn when I fire up the auger. It’s a little thing that lets me set the bit accurately.

The hip pad isn’t anything fancy, but it stands out when I’m augering larger and deeper holes. The pressure and heat buildup against your leg/hip are a lot less pleasant on other models. Since I can intentionally put my hip into it, I have better control over the Stihl BT 131. 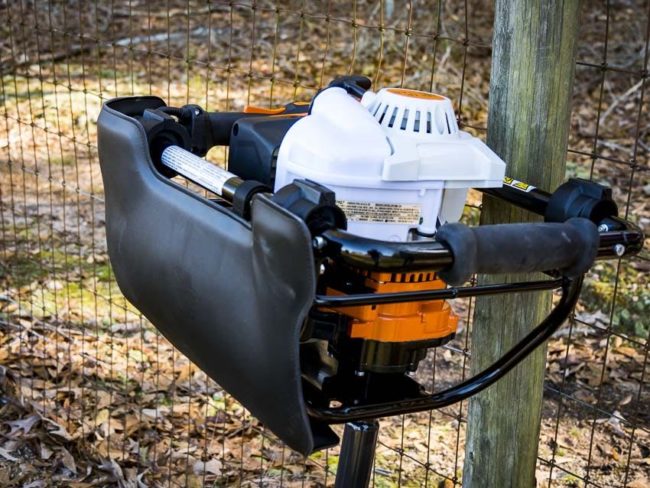 There’s also significantly less vibration from this auger than from others I’ve used. That doesn’t mean you’ll be able to auger for ten hours unscathed – it’s still hard work. But put this up against anything you might pick up from the equipment rental and you’ll notice a big difference. 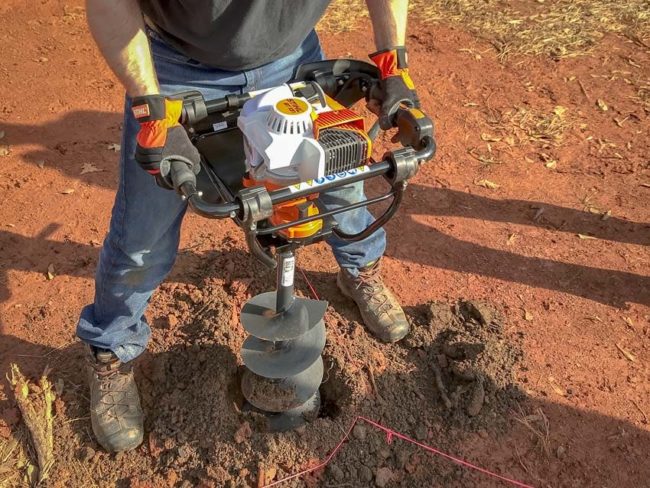 Stihl designed the exhaust to discharge away from the operator. This doesn’t just keep you from being engulfed in noxious fumes. It makes the BT 131’s 36.3 cc engine a lot quieter than you’d expect.

Put the Brakes On

The QuickStop Auger Brake is unquestionably the big deal about this tool.  Yes, at first it looks like a bar that could knock you out or take you down at the knees. But the brake is flexible where it connects to the engine and therein is the safety. If the Stihl auger begins to move violently or uncontrollably in a bind-up with a root or rock, the brake comes in contact with your leg, flexes, and stops the bit from turning. 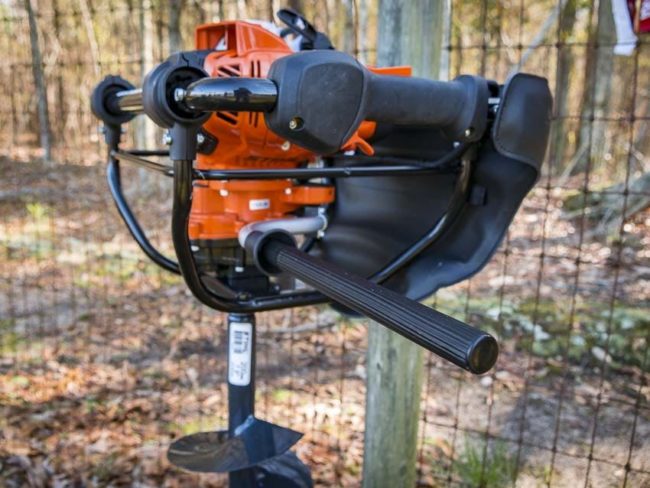 Most augers don’t have a feature like this, so you have to get used to how much you can let the auger work before binding. I was a bit concerned that the brake would be in the way. But after using the Stihl auger for a while, I didn’t even notice it. Stihl does a nice job locating it on the tool and giving it a little wiggle room that still allows you to work.

I really like the Stihl’s pistol-grip style throttle in contrast to the traditional motorcycle twist design. It’s much better ergonomically, allowing you to release quicker and control better.

The Stihl BT 131 performs its hole-drilling tasks beautifully. At end of my job list, there was no doubt it has plenty of power to get the job done – even through tree roots and rocks. Georgia clay doesn’t make it bog down in the slightest. As long as you’re using a well-maintained (or new) bit, there’s plenty of power for the full range up to 8″. 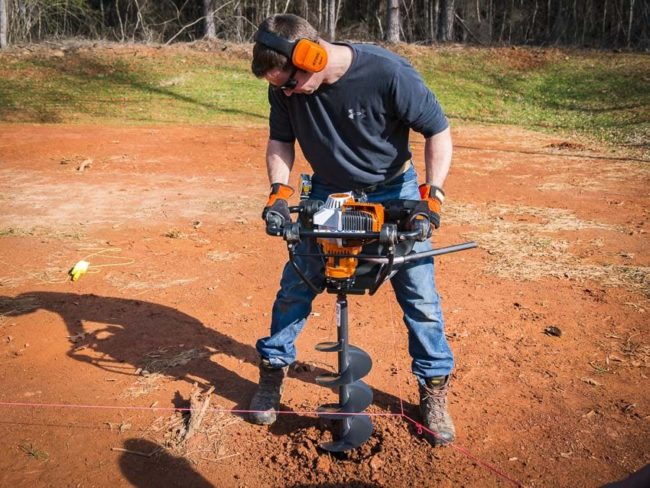 My only gripe is the placement of the semi-automatic choke on the underside of the unit. It’s inconvenient, but far from being a deal-breaker.

At $699.95 Stihl BT 131 isn’t pocket change. I wanted to compare it to its arch nemesis Husqvarna’s counterpart, but it doesn’t look like they offer something comparable in the US market (Australia and South Africa, instead).

You could consider the $243, 43cc Earthquake E43 but you won’t find the brake, vibration-dampening frame, or pad. There are several other value brands that save you money at the cost of features and performance as well.

Stihl puts together a really well-thought out and refined machine with their BT 131 Earth Auger. It sits at the top of the high-end market with a lower price than Echo and has the features and performance to warrant upgrading from the value brands.

Luke does remodeling and repair construction work by day. During his "off" time, he helps maintain a horse farm. When he's not out enjoying the outdoors, you can catch him as a riding double on Fox's Sleepy Hollow. Incidentally, he also makes the best burger this side of the Mississippi.

Extend Your Runtime With The Ryobi 40V Backpack Power Supply In the past few years, Ryobi has made a noticeable performance jump with its 40V lawn care lineup. In 2022, the brand designed a few unexpected innovations, like a joystick-controlled zero-turn. We wondered whether Ryobi was going to target the professional market, and we’re getting […]

Z Turf Releases Z-Spray Spreader Sprayers In Four Different Sizes Landscaping professionals value good-quality spreader sprayers to make a difficult job easier. They need tools that can work across a wide range of properties. That often means they require spreaders and sprayers that feature a narrow width and high maneuverability to keep them productive. The […]

The Stihl MS 170 Chainsaw Delivers a Value-centric Solution for Homeowners While Stihl chainsaws possess almost superhero status among professionals, we love when their more consumer-oriented models generate some love among residential users and homeowners. Why pay for the additional power and bar capacity when you don’t need professional-level capabilities? Consumers also appreciate compact saws […]

Ardisam the best, when it had the Tecm. TC300 fitted