The use of 4-stroke technology is over a century old, which came along with the combustion engine. OPE tools are another story. Several companies have tried their hands at it over the past couple decades, however only in recent years has it seemed to possibly stick. Still today you hear the high-rpm pitch of 2-stroke trimmers, edgers and blowers. The norm in the OPE industry is still 2-stroke power tools, but will 4-stroke gain traction? Should you make the switch? We discuss the Makita MM4 4-stroke technology, then give you our take and let you decide.

Before I could ride a bike, I had a motorcycle. In fact, I was punished by taking my motorcycle away. My Dad said if I wanted my motorcyle back, I had to learn how to ride my bike. Who wants to pedal when you can just grab a handful of throttle? I rode that Honda XR75 every day for a few years, until I was upgraded to real motocross bike, a Suzuki RM80. While the XR75 served it’s purpose, it was a lame 4-stroke woods cruiser, while the RM80 was a screaming 2-stroke. I had dreamed of finally having a bike (motorcycle) with a powerband. These were the late ’70s and early ’80s, hence at that time, 2-stroke was king in motocross. In fact, 4-stroke was heavy and didn’t build enough horsepower to be competitive. The 2000’s picture of MX has flipped on its head: 4-stroke now pretty much dominates motocross and supercross.

Just about anyone that handles cordless power tools knows the Makita name. However, many probably don’t know that they make gas powered tools as well. Not just a couple gas tools either. Makita has gas powered chainsaws, demolition saws, blowers, edgers, line trimmers, and hedge trimmers. Furthermore, Makita has both 2-stroke and 4-stroke power tools.

Makita understands this world of 4-stroke and 2-stroke combustion engines. They purchased the Dolmar chainsaw company and took over management in 1991, so 2-stroke is in their blood as well. With the dawning of a new day, Makita also wants to put their best foot forward with new 4-stroke tools, using their MM4 technology. The pressure from government and society for cleaner exhausts, cleaner engines, and better ergonomics are big proponents in this venture.

The Good, The Bad, and The Ugly

Before talking about all the glory of 4-stroke, why don’t we first discuss some of the drawbacks of 4-stroke. In years past, 4-stroke engines were heavier, hence the addition of valves, camshaft and lifters not found on a 2-stroke. Also, with the cam and valves comes the need to lubricate, so crankcase oil is added too. With oil in the crankcase, how do you pump the oil if the machine is upside-down or sideways? Then, looking down the road, there’s oil changes and valve adjustments. All these are good questions and valid concerns for 4-stroke technology in our OPE world.

Looking at the bad side of 2-stroke technology, the list would start with messy fuel mix. The task never ends of adding 2-cycle oil to the gasoline. Do you have the correct ratio? Which gas can did I use? Did I already add oil, or not? Next, the exhaust smoke and fumes to deal with, constantly smelling and seeing the burnt and un-burnt residual. Power is typically made at only very high RPMs, so 2-stroke tools are typically run at WOT. Most of all, engine siezures in 2-stroke engines are most commonly due to improper fuel mixing. While 2-strokes have definitely cleaned up through the years, the addition of oil is still a pain.

The MM4 technology is not a one-feature-wonder, it encompasses many aspects of their 4-stroke tools. Makita has been able to tackle the weight issue, so their 4-strokes are pretty much ounce for ounce to other 2-strokes in the industry. In some cases, we have seen where Makita’s 4-stroke is lighter than the leading competitors of the same tool.

Of course, you don’t have to mix oil, just add unleaded gas to the tank. And, make sure that the crankcase is full with motor oil, but this only has to be done once every several weeks. With the Makita MM4 4-stroke technology, the oil is moved to critical areas using pressure and vacuum, without the need of a sump. Makita’s MM4 OPE tools are truly multi-position tools, hence running at any angle. Other manufacturers claim this, but the details may say they can only run in that position for xx minutes. Some of the others use oil slingers to try and lubricate critical components, but this can be quite ineffective. On top of it all, you no longer have to purchase 2-cycle oil, so you save money while increasing profit.

No more hard starts. In addition to no oil being in the fuel, Makita MM4 equipment includes automatic engine decompression. This decompression reduces the pull start force by 40%, resulting in faster and easier starts. With no oil burning in the cylinder, emissions are also reduced. The noise of a 4-stroke is not only quieter, but it’s also a much more pleasant sound. In addition, vibration felt by the operator is much lower on a 4-stoke vs. 2-stroke.

Perception of Power – and the Truth

Measuring the true work of a tool is much different than the percieved sound of a tool or engine RPMs. Back to my childhood and the 2-stroke motorcyle days, hearing the scream of the 2-stroke sounded like it was going 100 mph. In reality, it was more like 30. Looking at motorcycles and racecars, horsepower may win races, but it’s torque that gets work done and takes your car from point A to B.

Using a 2-stroke edger, trimmer or blower, we hear the scream of the engine and this is what we’re used to. Switching to a 4-stroke, the engine tone changes and the decibels diminish, so our brain tells us less work is being done. This is the perception, but not the reality. For the 2-stroke engine to produce working force, it must turn a lot of RPMs, and keep it there. There is not a lot of bottom-end torque from a 2-stroke. On the other hand, a 4-stroke engine can start building torque from lower RPMs and maintain it under a larger RPM curve. This allows the Makita MM4 4-stroke tools to have a broader torque curve, which gets the work done. This broader torque/power range also allows the user to operate tools at a lower RPM, not requiring WOT. 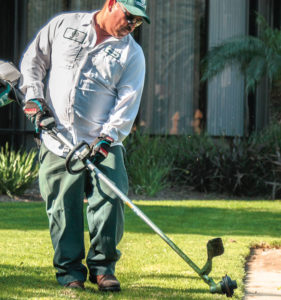 Makita is not the only brand in the industry dabbling in 4-stoke tools. Some of the brands have 4-stroke tools that still require pre-mix – I’m not sure I understand that concept. Anyway, others have dipped their foot in the pool for 4-stroke, but may not have made the commitment. Makita has the full gamut covered with their MM4 4-stroke tools.

When you are ready to make the switch to 4-stroke OPE, then you may want to have a long look at Makita. At this point, they’re the only manufacturer to have every tool available in 4-stroke. Included in the MM4 family are string trimmers, brush cutters, edgers, pruners, hedge trimmers, and blowers.

Our Take on Makita’s 4-Stroke Stable

We don’t necessarily jump on board a technology or idea just because it my be “greener”. We like to test, question, use science, and come to our own conclusions based heavily on facts. Our thoughts are pretty simple. If you can create a 4-stroke that is the same weight, has the same power, as efficient, burns cleaner, not as loud, does the same amount of work, and has a lower cost of ownership, then how can we not recommend it? We haven’t used all the MM4 tools yet, but we have used a couple. From first glance and use, the Makita MM4 4-stroke technology is living up to the marketing claims, and we’ll be sure to report more as we review and test more MM4 mahcines.

Check out all the Makita MM4 tools here .

Altoz Has a Fleet of Residential and Commercial ZTM Mowers Having reviewed the Altoz XC 610 Zi zero-turn mower and the Altoz TRX 660i zero-turn mower, we’re familiar with the brand. Altoz continues to announce additional models that expand its line of zero-turn mowers. With a variety of models, engines, deck widths, drive systems, features, […]

Generac Power Systems’ brand, Mean Green, has announced the opening of a new 100,000-square-foot facility in Hamilton, Ohio. The new space should help the company meet the increasing demand for electric-powered zero-turn mowers. The company previously produced four different commercial electric mowers and accessories at its Ross, Ohio location—about 10 miles away. The expansion will […]

Greenworks Widens Its Gaze and Enters Home Technology Space at CES 2023 You probably recognize Greenworks for its electric lawn care products or cordless power tool lineup, but the brand has a few new products that may seem a little out of the blue at first. We’re looking at the new Greenworks tools and gear […]

4 stroke is the way to go, tried to do a full electric lawn care company no where near what you can accomplish with gas, when I went back to gas equipment I tried to add some electrified tools as well to off set operational costs, tools are much better here in 2021 but I still don’t see them over taking gas, bought Dolmar 4 stoke backpack and trimmer used to run during grass season and have a echo 8010 for leaf season. Anyone thinking of trying electric tool i highly recommend looking into old Dolmar/ new Makita or Honda,… Read more »

I’ve got the biggest makita (70cc+) for blowing snow (and maybe lawns in summer), works great, comparable to leading brand Stihl in power, noise. Stihl is lighter (but you need to mix in 50:1 oil for the weight savings, its the 4 stroke with mixed oil). Stihl stalls easier, you have to be gentle hitting the throttle. Makita fuel line is undersized for winter, can break, warranty fix. Also emissions line can get clogged with condensation so oil in air filter. So you need to keep it above freezing before you start it. But once it is running it is… Read more »