Those of you who check in with this site regularly might remember that, back in October 2017, we found ourselves at the GIE Expo. A good time was had by all, and we had the chance to play with all sorts of new or upcoming releases from all the major players in the landscaping world. We usually find something interesting going on with Makita, and this year’s visit to their booth was no exception. One of their upcoming releases, the Makita Couple Shaft Power Head System, gives the user the option to choose between a couple different power heads and a whole slew of various attachments. At the time, the product had not hit the shelves yet, and the company hadn’t quite settled on a release date. Well, here we are, four months later, and Makita has finally released this versatile new system.

Are you into cordless convenience? Makita has that base covered. Do you prefer the power of Makita’s 4-stroke gas engine? This is definitely a viable option with the Makita Couple Shaft as well. Can’t decide between one or the other? That’s fine, grab both, because all of the attachments in this system fit onto either power head.

The cordless power head (XUX01Z) runs off of 2 of Makita’s 18V LXT batteries. It features 3 different speed options, and can turn up to 9,700 RPM. Obviously, with this couple shaft power head, the user can avoid mixing oil, as well as the aggravation that can sometimes accompany engines that need pull starting. It also features the brand’s Electronic Torque Control, which shuts off the motor when the rotation speed suddenly slows or stops.

Both options work with any of the nine available attachments options. Makita has released a brush cutter, straight and curved shaft string trimmer, articulating and double-sided hedge trimmer, pole saw, cultivator, and edger attachments. A shaft extension is also available. All attachments utilize a lever-style lock system. This makes for simple, tool-less installation on either of the Makita Couple Shaft power heads. 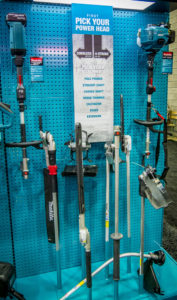 Everyone loves options, and kudos to Makita for coming up with a highly flexible system for OPE applications. If you’re already on the LXT battery platform, the cordless side of this system makes a lot of sense. For those folks who prefer gas power, Makita’s 4-stroke gas powered option will likely fit the bill. Ultimately, we think that giving the user the ability to switch out attachments quickly and easily for either option is a really smart move. We wonder how many people will opt to run off of both platforms, but the option is there for anyone who wants that kind of versatility.

We haven’t had the chance to get our hands on these yet. But, we are looking forward to the day when we can put this system through its paces. Stay tuned to this site for more information in the future.

In the meantime, if you’re desperate for more information in the here and now, check out Makita’s OPE site .

Ryobi 40V HP Brushless Cordless Hedge Trimmer Provides Impressive Capacity While Ryobi has a ton of homeowner- and DIY-targeted products, one area that it has been diving head-first into lately is high-performance cordless OPE. The brushless, 26-inch Ryobi 40V Hedge Trimmer joins the brand’s Whisper Series with familiar features and eyebrow-raising performance. We got it […]

EGO’s 10-Inch Telescopic Pole Saw Helps You Take Control Of Your Yard EGO is no stranger to pole saws, having one featured in its Power-Head attachment system. The release of the EGO Telescopic Pole Saw, however, stands as the brand’s first dedicated pole saw. EGO included some updates and industry-first features with this standalone model. […]

Does the Makita system accept other attachments that are from the Expand It line? For instance the Craftsman or Ryobi.