Hauling yard debris, mulch, trash, and even dirt is no problem for the Overland Carts electric powered wheelbarrow. With a 10 cubic-foot capacity, it gets the work done.

Have you ever had the privilege to clean up five acres after a hurricane? Me neither, until Hurricane Irma decided to wreck Central Florida with torrential rains and wind. Did I mention that five (5) acres is full of oak and palm trees? Yeah, what a bonus! Let me just say, it was perfect timing that we had the Overland Carts electric powered wheelbarrow in for review.

Our shop property sits off the beaten-path, on a dirt road, with a creek flowing about 100 yards behind the shop and oak tree forest surrounding. Nestled in the sub-urban area of an already sub-uraban town, between Tampa and Orlando. If you followed the path of ol’ Irma, her eye went right over the top of us.

Does that mean we got a quiet hour in the middle of chaos during the hurricane? Yes, in addition to the multiple hours of Westerly winds before and hours of Easterly winds following the eye. Great news, no one was hurt and no damage to buildings…just ten (10) days without power. AND, three large oak trees were blown over and about 100 limbs from each of the hundreds of oak trees surrounding. Ok, enough with the boring story, the picture is set. Now you see why we were thankful for the Overland Carts wheelbarrow. 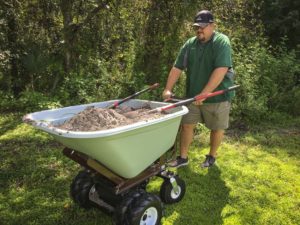 We actually received the electric powered wheelbarrow a few days before the storm. Since it was a slow moving storm, we had plenty of time for some preparation. We have a well pump on the property that provides our water, so we wanted to protect the well from rising water. We placed a piece of an eight-foot diameter pipe around the well, but we needed to pile dirt around the pipe to keep water from seaping in. What a true test, right out of the box, to fill the Overland Carts wheelbarrow full of dirt and see what she’ll do. No problemo! We fill it with dirt, grab a handful of throttle, and the wheelbarrow powered on.

With an empty cart, the 1/2HP motor will propel the wheelbarrow about as fast as I can walk, at a fast pace. I’m also 6’2″, so I have a longer than average stride. A variable-speed electronic speed control allows the user to provide just the right amount of input to deliver the desired speed. With a full load of black dirt, this probably tips the scales at about 800 pounds. One cubic yard of dirt weights approximately 2,000 pounds. Ten cubic feet is about 40% of a cubic yard, hence 40% of 2,000 is 800. Full speed with the full load is not quite as fast, but it still moves at a steady pace.

Over Hill, Over Dale, As We Hit the Dusty Trail

Flat ground is no match for the Overland Carts electric powered wheelbarrow, but what about the hills? Well, it just so happens that we have that too. Even with a full load, going up a 20-degree slope is not a problem. Sure, it slows down a bit, but it keeps on truckin’. Not only does the motor power on up and down hills, but the brakes work equally as well. The electromechanical brakes automatically engage when the throttle is released, so it won’t go rolling downhill.

Our version of the Overland Carts electric powered wheelbarrow is the C27-10A. This designates we get the 10 cubic foot bucket and dual ag tires. These dually tires on each side give the electric powered wheelbarrow a very broad stance, keeping the cart balanced, even under full load. In addition, the agriculture tires (tractor treads) work great even in our Florida sand, keeping traction. 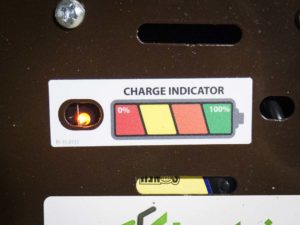 Using the Overland wheelbarrow to move the dirt we discussed earlier was quick work. With the 10 cubic foot bucket, it only took two trips to get all the dirt needed for sealing up the well. After the hurricane is when we truly tested the runtime of the electric powered wheelbarrow. Our property is laid out like a long rectangle, probably an acre wide and five (5) acres long. There were oak limbs, moss, and palm leaves literally covering the entire property.

To clean up this mess, it took days of work from multiple people and countless trips from the Overland Carts wheelbarrow, filled to the brim with debris. It has no issue running all day, making scores of full-load trips. Each evening, we just plugged in an extension cord to the charging plug, hence the battery is fully charged the next morning. Plugging in the power cord, the charge indicator light shines with the appropriate colored LED for the amount of current charge. 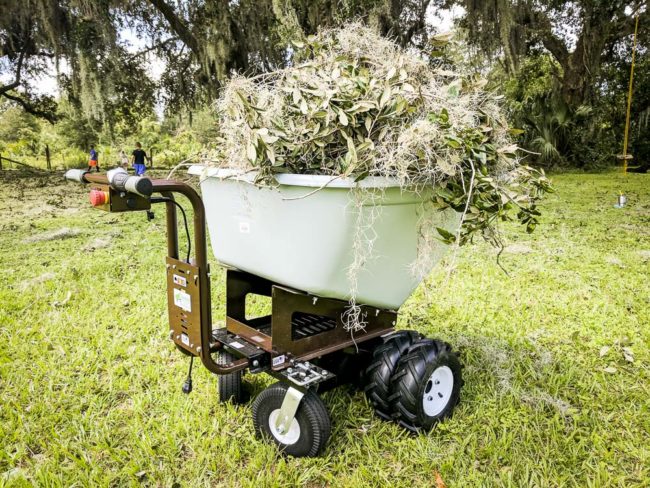 Furthermore, the right side of the handlbars include the twist-throttle and LED power indicator. Three LED indicators display the battery level, two green on top, and a red on the bottom, indicating the battery almost empty. Rolling on the throttle gives a delayed response, before the wheels turn. The delayed response is almost too long, giving the feeling that something may be wrong. I’m sure this is done in the name of safety, but it is worth noting.

Parallel Parking and the Dumps

Not only do the dually ag tires aid in traction on the front, but the rear wheels and tires equally aid in handling and control. With the power driven to the front wheels, the rear wheels rotate freely and act like casters on a shopping cart. As the user provides input on the handlebars, the rear of the machine can be rotated easily. In fact, you can move nose-first into a space only about as long as the wheelbarrow, then rotate the back around, and it fits perfectly. Parallel parking has never been so easy…for an electric powered wheelbarrow.

Flip the rocker switch on the panel in the middle of the handlebars, then twist the throttle. Voila, the Overland Carts electric powered wheelbarrow now moves backward, in the same manner as forward. Also, to ensure no accidental movement or to ready for storage, the user can push the big red button that kills power to the controls. Twist the red button and this reengages the power to the controls.

The dump system for the Overland wheelbarrow is not power-assisted, however it is fairly easy. Once the user arrives at their desired location, the dump pin release must be pulled and rotated 1/4-turn. Then, apply upward force on the rear of the bucket to dump the contents. The hinge-point of the dump bucket is mounted fairly neutral, so an evenly spread load should not be hard to dump.

After several weeks of real work with the Overland Carts electric powered wheelbarrow, we have had no issues. We have also not yet turned the wheelbarrow over, even with full loads going uphill and sideways traversing a hill. Power is strong, due to the 1/2 HP motor and the 18:1 differential delivers plenty of torque to move these heavy loads. Controls are easy to use and self-explanatory, and steering the wheelbarrow takes very little force.

While this is a huge help for those looking to haul heavy and many loads, it does come at a cost, literally. The price for the Overland Carts C27-10A, as we tested, is about $2,400. This may be a shocker for some, however we do think it’s a good fit for those in need. Most of the typical 1/4-acre neighborhood homes probably have no reason for a purchase such as this. However, those that have multiple acres, taking care of animals, or handling lawncare maintenance may justify the cost.

For you landscaping Pros who play with a lot of mulch, check out this new mulch-spreading addition for your existing truck. The Mulch Mate, by automating the process of loading mulch into a wheelbarrow, virtually eliminates the need to hire some guy to stand in the back of the truck shoveling mulch into wheelbarrows. Instead, […]

I’ve done my share of hauling endless wheelbarrow loads of…’everything’. From wet concrete to broken concrete, mulch, and dirt, many a load I have wheeled. Oh, how I dreamed of an engine-driven mule that would not only haul but also dump the heavy load. Alas, my dreams have come to life. Ok, back to reality. […]