Echo's top of the line SRM-280T is a powerful machine that can handle tasks most trimmers can't. The additional power comes with a reduction in run time, as expected. Ergonomics are about as good as you'd find on any commercial trimmer. It's tough for a top tier priced product to score well for value, but the SRM-280T provides such great performance and power that it's well worth the price.

The Mountain, as our family calls it, is Dad’s mammoth water feature that sits at the north end of my parents’ yard.  It came about several years ago when the county decided to widen the road in front of their house.  Dad somehow managed to commandeer all the broken pieces of sidewalk that were casualties of the project, and turn them into a creation of his own.

It really is an impressive feat, especially for a weekend warrior.  A waterfall cascades from a small pool at the top of… well… a mountain, into two proportionally larger pools further down and then empties into a large koi pond at the bottom.  On either side, the mountain is flanked by roughly 1000’sq of terraced landscape with cypress trees, palm trees, various shrubs, flowers… and a lot of maintenance.

Therein lies the challenge.  Not long after The Mountain was finished, it became clear that all the rolls of weed control mesh that were painstakingly laid out and staked down before the mulch went down were nothing more than an expensive exercise in futility.  Weeds started popping up as though the mesh was a seed bed (ironic, eh?), and it was taking more and more time to keep them under control.  Eventually, the mulch acquiesced to the weeds, and a string trimmer became the only weapon that could tame The Mountain.

Since the weed domination, The Mountain has found a much more rustic look, and the weeds are allowed to grow with only the occasional haircut.  But even with good commercial grade string trimmers, that haircut is a laborious process that can easily take over an hour.  It’s a job that would really benefit from the use of a good brushcutter.  As a lawn guy though, when do you justify the purchase of a single purpose tool you’ll only use occasionally for one account? 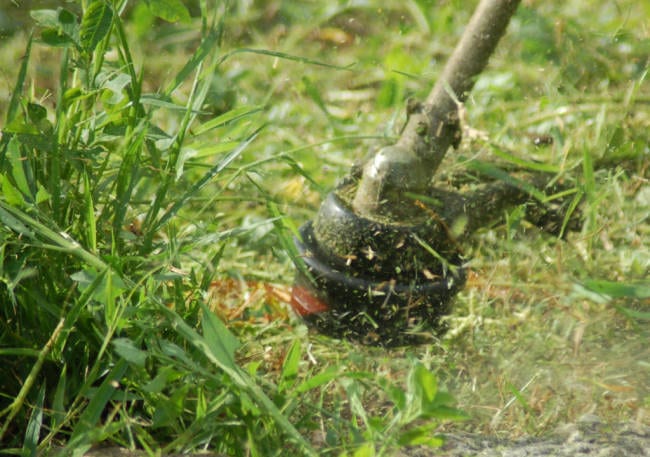 That’s where the flagship of Echo’s commercial string trimmer line, the Echo SRM-280T, is an ace up your sleeve.  The 280T takes weed whacking to a whole new level.  Its 28.1cc motor produces unrelenting power, and the reduced gear ratio, which adds torque and puts the “T” in 280T, means the RPMs at the cutting head just don’t let up.  The Echo SRM-280T delivers enough punch for anything you would attack with a trimmer, and more.

I have always been hesitant to delve into the upper echelons of string trimmers where the 280T lives, mostly due to price, but more specifically over the question of value.  Is the extra power of a 28.1cc motor worth the extra money?  Power is great, but there isn’t always a Mountain to climb.  Does that extra power really carry a tangible benefit for everyday use?  Is that “T” after the number really going to make a difference?

In a word – absolutely!  The Echo SRM-280T can be the landscaper’s everyday best friend.  All that extra power makes a big difference in the time it takes to get a yard trimmed.  Many trimmers somehow seem to create a slight down force at the cutting head.  It’s almost as if the grass is ducking away, and it requires an extra pass to get the cut right.  At full throttle, the 280T cuts so quickly and respectably that weeds stand at attention, proudly awaiting sure decapitation.  It works great as an edger, as well, when you have those flower beds that sit out away from the normal edger route.  Jobs definitely go faster with this machine!

Full throttle is not great for all situations, and throttle control, for me, was a bit hard to warm up to on the 280T.  The trigger has changed from what I’m accustomed to on a string trimmer.  Essentially, Echo has taken the throttle off of a backpack blower, and put it on a trimmer.  What used to be a slender lever, pivoting at the connected end, is now a more like a push button.  Aesthetically, for you gun guys (to include gals), the trigger used to be like a revolver’s.  Now it more resembles the trigger of a 1911.  It still pivots from the same point, but with restraint.

There is a distinct feel, as well as pros and cons, to either style.  The previous trigger offers more control with less effort, but falls short in durability.  Echo’s new style throttle has a tighter fit and less leverage, but it is much beefier, and far less likely, if not completely unlikely to become unintentionally detached.  While I still prefer the older accelerators to the new, the current version is agreeable, with some practice.  And you can’t argue with its resilience. 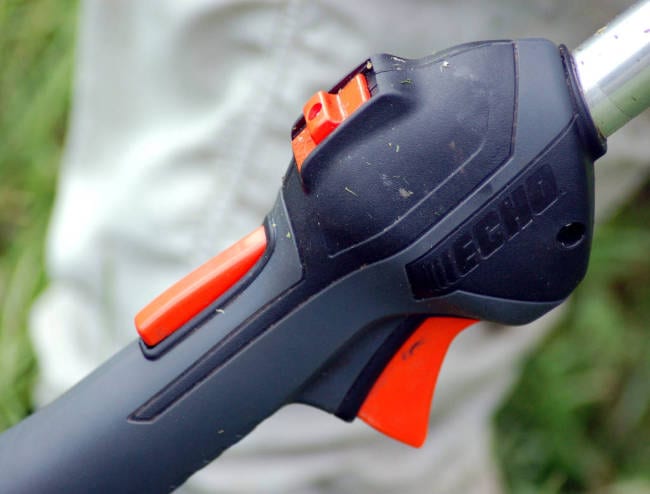 The Echo SRM-280T comes equipped with a spool of Echo’s .95 Cross-Fire line, and will also handle the .105 line through the Speed-Feed head fixed at the business end.  In addition, Echo offers, as accessories, bump heads and fixed line heads that can be loaded for bear with up to .155 line.  However, for The Mountain, or for general use, the 1.05 line seems to be the right ammo for me.

The Speed-Feed head is a great head, but like the new trigger, this variation of a theme is not without a slight learning curve.  The head is truly easy to load – almost to the point where you wonder if you’re doing it right.  The bumper plate never needs to be removed for spooling; in fact, doing so will make things tough.  You simply line up an arrow on the top with one of the eyelets, slide the line through half way and turn the top of the head until the line is the right length.  Done. 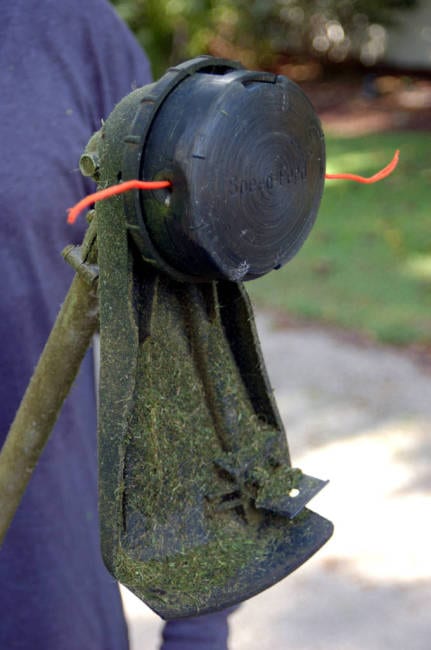 The tricky part comes on that rare occasion when the line gets twisted, and pinches inside the head.  Then the cap has to come off.  The tabs on either side, that hold it snug, are not terribly cooperative.  Putting the head back in order is not the easiest task either, as it is awkward to keep the line tight and lined up, and get the tabs snapped back in properly.  Twice so far, I’ve had it “right” only to have the cap come off on start-up.  I know now how particular it is, so I should be able to avoid that situation in the future, but there’s your learning curve.

That said, I like the Speed-Feed head a lot, not only for ease of spooling, but for the way it glides evenly over the ground.  The smooth, virtually flat surface of the bumper cap all but defies the experienced user to gouge the grass, and it makes a rookie look like he knows what he’s doing.  Those courtyards and backyards that have to be mowed with your trimmer are going to look great if you use a 280T.

In short, the Echo SRM-280T is a Gatling gun that makes a great sidearm.  It’s George Foreman gracefully dancing a ballet, Superman sipping tea with a six year old…  You get the point.  The 280T has all the power you could ever need, but is easily tamed to make short work of every yard’s details.  Good stuff, Echo! 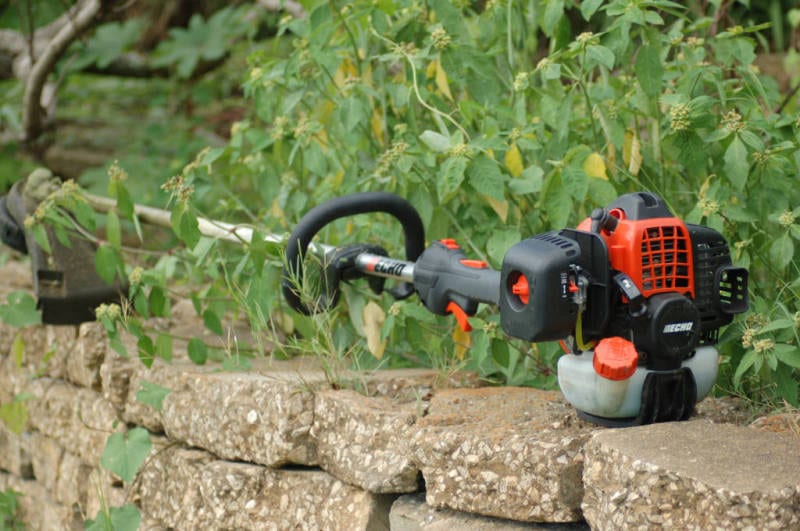 A jack-of-many-trades, Tom Rutherford is a professional painter and landscaping professional who is as comfortable in the field with an airless sprayer as he is with a zero turn mower or string trimmer.