For cutting through concrete and masonry with more torque, check out the new CGS-7410 Echo Power Cutter. With a host of Pro-level features, this cut-off saw will take a tough job and make it easier than you’re used to.

The CSG-7410 Echo Power Cutter is one of the easiest-starting 2-stroke engines we’ve ever had the pleasure of cranking up. Its 73.5cc engine has plenty of muscle, and its 2.6:1 drive ratio allows this high-revving engine to deliver more torque to the cutting wheel. Frankly, the Echo is a beast.

Echo’s Power Cutter uses a 73.5 cc, commercial-grade, 2-stroke engine to power this beast. For its gearing, Echo uses a 2.6:1 drive ratio of wheel pulley to drive pulley. The result is a power cutter with the highest cutting torque in its class.

When belts need tightening, don’t fret. With the Echo Power Cutter, tightening belts is super simple and convenient. Access to the belt tensioner is located right on the side of the CSG-7410. What’s more, Echo includes a reference indicator on the side of the arm so that you don’t have to remove anything. It’s not as convenient as Husqvarna’s spring-loaded auto tensioner , but at least you don’t have to take any covers off. 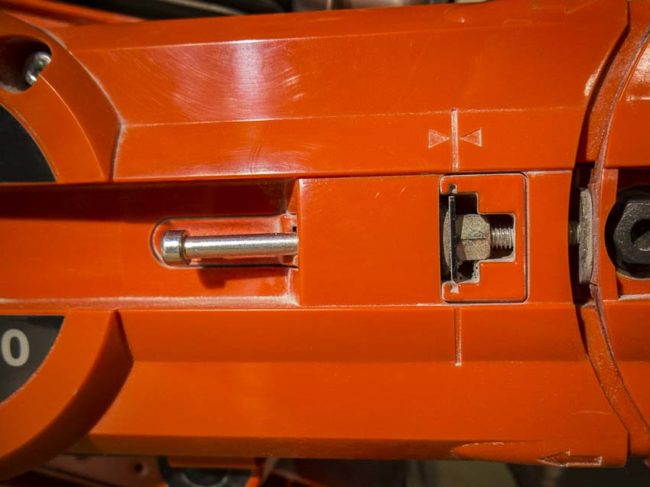 Dust inside any engine is a terrible idea, so Echo has come up with a pretty thorough system for keeping it out of this one. The CSG-7410 uses their patented PowerCore 4-stage filtration system to make sure dust ingress is kept to a minimum.

Basically, an air injection air cleaner uses centrifugal force to remove debris from the air. Then, an air cyclone further reduces dust. From there, the air is pulled through a 3″ paper filter that captures the fine particles. Finally, a fine mesh filter removes any remaining dust before it hits the carburetor.

The new Echo Power Cutter goes the extra mile into making pull starts less obnoxious. With a spring-assist starter, a decompression valve, and a choke with an automatic fast idle, you’ll spend less time yanking your pull cord and more time blasting your way through concrete.

We had a little hardscaping project at one of our houses, which required cutting through some concrete and concrete pavers. This gives the Echo Power Cutter a chance to wow us with what Echo claims is the highest in-class torque, along with all of its other features.

Turn On The Water Works

The first thing that jumped out us was how easy and clean the water hookup was. Is this a trivial detail? Maybe, but it has a 1/4-turn water valve that doesn’t leak all over the place. Sometimes it’s the simple things that set a tool apart. 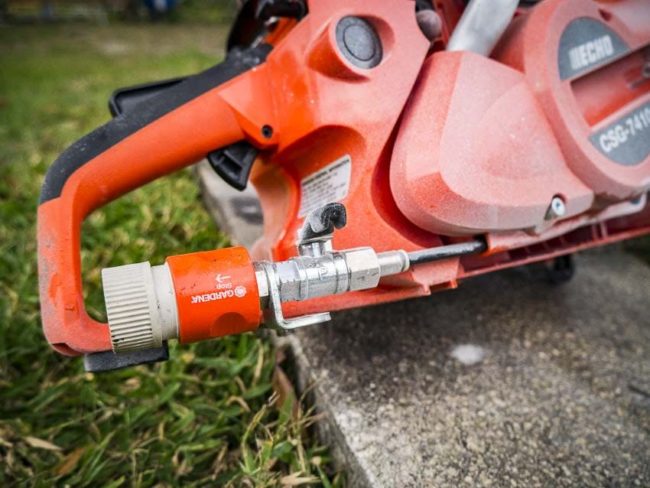 After that came startup. The Echo features the brand’s easy start technology. At this point, just about every manufacturer on earth claims to have ironed out the bugs of a pull-start system, but we’ve been let down before. 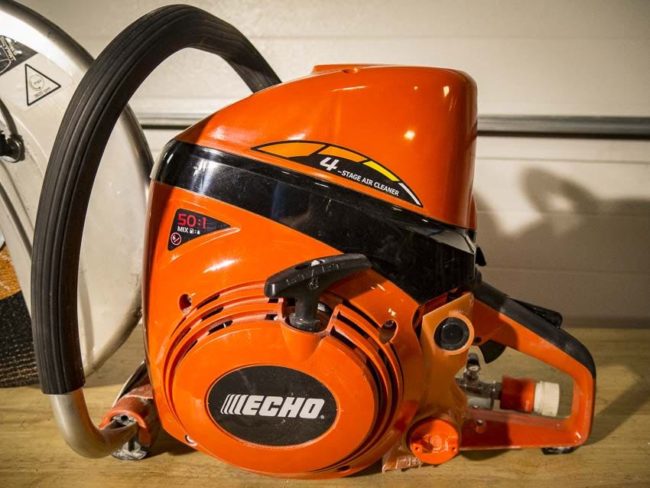 Not this time, though. The CSG-7410 – no joke – is the easiest-starting large 2-stroke engine I’ve ever pulled. It has a spring-assist pull cord and a choke with an automatic fast idle. Echo has also included a decompression valve to help the cutter start up quickly and smoothly, but whether I used it or not, the Echo cranked up on the first pull every time. I’d fill the engine with fuel, pump the primer bulb until it firmed up, set the choke, and crank it up on the first try.

Then I got to the actual cutting. This 73.5cc engine means business, but it’s not unwieldy. Echo has balanced this 14″ saw really well, and although I did experience some vibration (it’s hard not to feel some vibration from a motor that’s turning almost 10,000 RPM), the saw really settled into the cuts smoothly.

Plus, the CSG-7410 has a reversible cutting arm that allows you to reposition the blade from the center to the outside. This makes cutting flush against a wall an achievable feat, which is pretty cool.

Echo also includes a momentary start/stop switch on this power cutter. I wish they would include this feature on all their equipment because you don’t have to worry about turning a switch back to the “on” position.

The CSG-7410 Echo Power Cutter retails for $899.99. It comes with a 1-year commercial warranty or a 90-day rental warranty, and it includes an abrasive wheel to get you started.

As you can see, the CSG-7410 has a pretty competitive price. It falls about $20 cheaper than the Husqvarna K 770 Power Cutter that we recently reviewed on the PTR site. It’s also far less expensive than Makita’s EK7651H MM4 Power Cutter at $1,199. Though, to be fair, that model comes with a 4-stroke engine.

The CSG-7410 Echo Power Cutter is one of the easiest-starting 2-stroke engines we’ve ever had the pleasure of cranking up. Its 73.5cc engine has plenty of muscle, and its 2.6:1 drive ratio allows this high-revving engine to deliver more torque to the cutting wheel. Frankly, the Echo is a beast.[/alert]

ECHO Battery-Powered Self-Propelled Lawn Mower Sets The Stage For eForce Line ECHO has been in the battery-powered equipment game for quite some time. We’ve seen the development from its first-generation 58V lineup and the transition to the current 56V eForce tools. The ECHO DLM-2100SP lawn mower headlines this system and we wanted to take you […]

ECHO CS-501P Chainsaw Caters To High-Performance Needs Without Bloated Weight Recently we had the opportunity to help our friend Eli Mosley out on the ranch to deal with some downed oak trees. We had some success in the past using other battery-powered chainsaws, but we wanted to test out something in the 50cc class to […]

Echo X-Series String Trimmer Produces Eye-Popping Performance When Echo announced its X-Series line we wanted to give each of these tools a thorough workout. An opportunity arose when our resident rancher, Eli Mosely , called me up. He needed a string trimmer that could handle long days and tough conditions. This seemed like a great […]

I bought the Echo concrete saw about a month ago. Easy to start and I like the outboard cutting. It lacks power! It takes four times as lone to male cuts. The motor logs down and won’t keep the RPM’s my employee and I hate using it it is a wast of money. All my other echo stuff is great. This has been a huge disappointment.