The Makita EB7650TH presents a great value in the pro landscaping trade. Between its' great work efficiency, 4-stroke engine, and active cooling system, the EB7650TH is a solid buy at $499.

Do you happen to get jazzed about lawn care, and more specifically, do you have a particular fondness for well-functioning backpack blowers? Does fuel efficiency get your motor cranked? How about a cleaner-burning, 4-stroke engine that requires no mixing of fuel? Do you dream about a cool breeze caressing your back while you actively send lawn clippings off to the great hereafter? Do any of these thoughts tickle your proverbial fancy? If you answered yes to any or all of these questions, I’ve got some good news for you. The Makita EB7650TH MM4 4-Stroke Tube Throttle Backpack Blower combines fuel efficiency with comfort, power, and a world-class active cooling system.

We recently had the opportunity to test out the Makita EB7650TH, along with 6 other blowers from various commercial grade manufacturers, when we ran our backpack blower head-to-head shootout. We got the chance to run the blowers through all sorts of empirical tests to prove how they stood up to manufacturer claims, and how they fared against each other as well. Not surprisingly, Makita showed very well in a number of categories. Furthermore, it was the only 4-stroke blower in the shootout, and proves that you don’t have to mix oil and fuel to battle with the best. 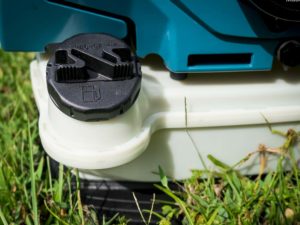 The Makita EB7650TH excelled in this respect. In runtime tests, the Makita finished toward the top of the pile when compared to comparable pro-level blowers. On a full tank, this blower ran for over 71 minutes at WOT. Of course, the size of the tank in relation to the other models could account for this; if the Makita tank was noticeably larger, you would expect a longer runtime. However, at 64 oz, the fuel tank on the Makita falls on the smaller side of the spectrum for the blowers we tested.

Even running all of the blowers with only 6 oz of fuel proved that the Makita performed near the top of the fuel efficiency list. It finished second in our tests. Plus, with a 4-stroke engine, there is no need for premix oil. The Makita EB7650TH runs cleaner, and for longer, than almost every comparable brand of blower we tested.

For those who don’t know, blower manufacturers spout off all sorts of information in regards to their blower’s power. Generally, after testing their product, they will list a rating for MPH and CFM. Those numbers are helpful to know, but they might not tell the whole story. So, in our tests, we look at the Newton force produced as well. Newton force is the force required to move 1 kilogram of matter 1 meter over 1 second. The Makita EB7650TH achieved 33.9 Newtons on the force test, and the difference between this blower and the winner was pretty negligible.

It performed well in our performance testing, cranking out 197 MPH winds. In the Cubic Feet per Minute (CFM) calculation, we measured the volume of air the blower produces at Wide Open Throttle, at the tip of the tube. The EB7650TH delievers 732 CFM in our test, which is quite a bit more than Makita’s claim of 670. Kudos to Makita for under-promising and over-delivering.  All of that is to say that while the Makita produces fast air, with an ample amount of volume.

In addition to our lab and benchtop testing, we also brought a real-world element as well. Blowing leaves just seems too easy, so we decided on using wet sand on asphalt pavement. Marking a 72″ x 72″ inch sqaure, we evenly raked out a 50-pound bag of damp playground sand. Next, we loaded the Makita EB7650TH blower on a rolling stand, with the nozzle at a 45-degree angle and the tip 12-inches from the ground. We roll the blower up, while at WOT, until the tip is even with the beginning of our marked area. After allowing the blower to run for ten seconds, we measure the swath size marking in the sand. At a max width of 22-inches and max length of 34-inches, the Makita EB7650TH blower achieved a 748 square-inch swath.

The Makita backpack blower includes very comfortable straps and a back pad. The straps were easy to cinch up, and the vibration was such that neither of those things should cause too much discomfort on longer jobs. There was one issue I had with this blower in this regard, however. Because this blower was a little on the heavier end of things, and because it has a narrower, but deeper, body design, I felt its weight more acutely. Almost as if it hung from my shoulder blades, rather than settling evenly across my back, the Makita felt just the tiniest bit awkward by comparison to the other blowers.

However, the Makita EB7650 has a great active cooling system that makes up for the slight awkwardness of its weight displacement. Makita designed the fan intake directly behind the user. As the blower runs, it pulls air through the intake, across the users back. The result is a much cooler blowing experience. Other blowers included this feature as well, but Makita’s design worked much, much better than everyone else’s. 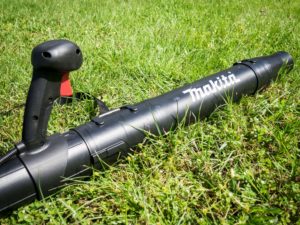 This blower also includes a couple different tips and an easily adjusted pistol grip handle. Makita designed the EB7650TH with a step plate for easier start-up as well.

The only knocks I’m prepared to give the Makita EB7650TH come down to its weight and its power. The difference in weight between the Makita and other high-end backpack blowers is, realistically, negligible. However, when it comes to weight displacement, this blower just sits a little awkwardly. It feels like its pulling down on your shoulders a bit. Waist and chest straps could probably fix this, though I don’t know too many lawn guys who would be wearing this for long enough to fuss with all that unless they’re tackling really large jobs. As far as power goes, this blower will definitely get the job done. 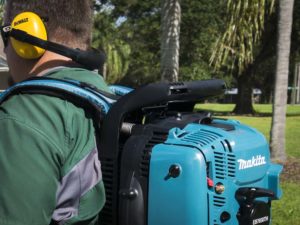 Make no mistake though, the Makita EB7650TH is a great blower, and at $499, presents one of the better values on the market considering performance, runtime, feature set, and power. This blower might not actually be significantly quieter than other, comparable models, but with the lower tones it produces, it definitely sounds less abrasive than a 2-stroke engine. The fuel efficiency on this blower is one of the best-in-class that we tested, and we love the 4-stroke engine. Not having to mix fuel feels like a huge perk for us, believe it or not.

Plus, this blower has one of the best features we’ve seen (or felt) lately. The active cooling system on this backpack blower is second to none. At Wide Open Throttle, the blower pulls a good amount of air across your back. This might be a detriment during the winter, but during the summer, when the vast majority of the year’s lawn work is being done, this feature sets it apart from most other blowers. We’ve been told that there have been lawn guys claiming that they’ve actually felt a little chilly while using this in the dead heat of a Florida summer. I don’t know if I quite believe that, but the active cooling on this blower does feel effective. 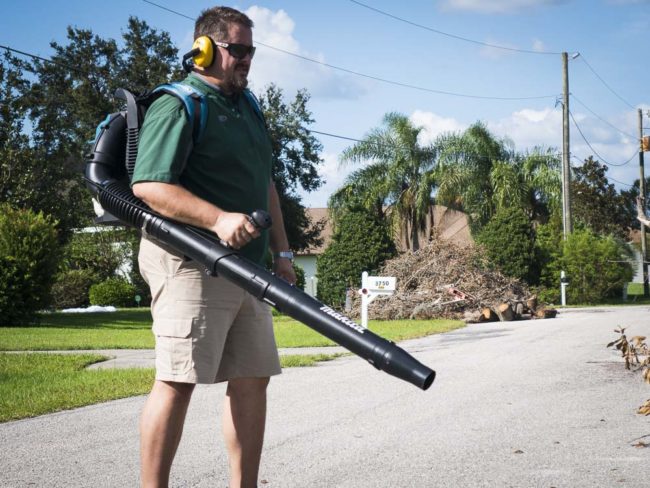 Ridgid Adds Outdoor Power Equipment and EXP Batteries to 18V Lineup Ridgid OPE is something that has been much anticipated, especially by those who are already on the platform. The brand finally announced its plans to roll out the first batch of OPE, with the lineup including some lawn care staples. Best of all, the […]

Greenworks Hits 700CFM Without Breaking a Sweat If you have an interest in making the switch from a gas blower to battery-power, the Greenworks BL60L512 60V 700 CFM blower might give you enough of a reason. Greenworks is one of only a few OPE manufacturers to have hit the coveted 700 CFM mark for battery-powered […]

Ryobi 40V Jet Fan Blower Also Includes a Vacuum Function Shoveling leaves into garbage bags might just be one of the worst parts of fall cleanup. Luckily, Ryobi has a product that encompasses the whole leaf-cleanup process, from blowing to vacuuming, to mulching. To sweeten the pot, it’s all done in one machine that transforms […]